I’m pretty alert to such problems these days. Soap doesn’t work. Toilets don’t flush. Clothes washers don’t clean. Light bulbs don’t illuminate. Refrigerators break too soon. Paint discolors. Lawnmowers have to be hacked. It’s all caused by idiotic government regulations that are wrecking our lives one consumer product at a time, all in ways we hardly notice.

99% of men are not interested in plus-sized (“fat”) women in just the same way 99% of women aren’t interested in guys under 5’6″. It’s just true and anyone who says otherwise is lying and should be designated as untrustworthy.

Vegetable oils are better called industrial seed oils, P.D. Mangan reminds us, since they’re made from seeds, not vegetables, and require an industrial process to make them in any volume: The manufacturing process for vegetable oils involves pressing at high pressure, and extracting more oil using solvents such as hexane, a volatile hydrocarbon similar to…

Great comment as well from Slovenian Guest with link to this study:

Using the lowering of LDL-C as a surrogate marker, accomplished through either diet or medicines, has proven to be, at best, inconsistent and, at worst, misguided. Furthermore, using weight or body mass index (BMI) as a surrogate marker has been uniformly ineffective. While some people lose weight acutely through self-imposed dieting, they routinely gain it back, often with worsening of their metabolic state.

“We’re from the government. We’re here to help.”

Very interesting article on how we’ve been lied to for decades about what to eat.

Several good links and quotes including this regarding the effects of following government low-fat/high-carb diet guidelines:
In a recent editorial appearing in the British Journal of Sports Medicine, researcher Zoe Harcombe from the University of the West of Scotland explains that obesity rates among British men and women rose from 2.7 percent in 1972 to 23 percent and 26 percent, respectively, by 1999.

The stats back him up. Since the US government first published a set of national nutrition guidelines in 1980, rates of obesity and related diseases like diabetes have more than doubled. “Childhood diabetes was basically unheard of, and now it’s an epidemic,” Lustig said.

Eat meat, full-fat dairy, vegetables, some fruit, and drink plenty of water. Get some moderate-to-strenuous exercise everyday (starting slow and working your way up), especially if your job has you sitting most of the time. Get enough sleep so you feel rested and ready when you wake up.

BMI is crap when it comes to assessing an individuals health status. Body fat percentage is a much more reliable and functional metric, but since BMI is cheap and easy it gets used instead.

I was disappointed during my last annual physical (work mandated) that my doctor brought up that my BMI was 28 (I’m just a smidge over 6 ft.) and above the desired range. I asked her to check my waist measurement, which the MA had taken right after weighing me (fully clothed and with shoes on). 31 inches at the abdomen. I most closely resemble the 15% body fat images in the charts below, but with more developed chest, shoulders and arm musculature. “Weight” is not an issue for me, but most physicians just run through a script during these types of appointments, which makes me glad I’m on the clock and don’t have a co-pay for these encounters.

Looking at these two charts describing make and female body fat percentages, you see that they basically agree on the male side up to about 15% body fat. There is a pretty significant divergence though at @ 20%. The first chart displays a pretty sloppy guy at 20/22% who looks like crap compared to preceding 14/15% pic, while the second chart @ 20% shows not much difference from the 15% pic preceding it.

It’s pretty much the same for women, where the first 3-4 groups are comparable, but then we see a divergence at 25%.  In the first chart the image at 25% is definitely inferior to the second chart 25% image which depicts a flat stomach and smooth, firm curves. 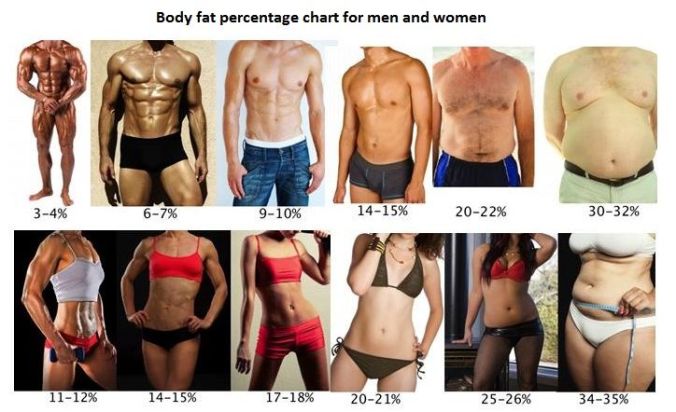 The second chart 25% image is what I would call “not-so- bad-dad bod”. 30% is the more typical shape for the dads I coach football with. Most of the moms at my kids’ school resemble the 35% image from the same chart, but with more belly and less hour-glass-ish lines.

According to this study though, men on average are at 28% and women are at around 40% body fat.

Not many Americans have their body fat measured by expensive whole-body X-rays, so actual data from this source is sparse. However, Chaoyang Li and colleagues writing in the “American Journal of Clinical Nutrition,” established a baseline for the average body fat of the American population through this method. The authors performed their analysis on a representative sample of adults between 1999 and 2004. They found that body fat in men averaged 28.1, while in women it averaged 40.0. Unfortunately, both the male and female averages exceed the maximum percentage for good health.

I’ve heard that a 90% grade is now considered an “A” in the public school system in my area. If we just look at the second chart, I’m very sure that 90+% of women would consider any of the men in the 10-20% groups to be adequately physically attractive. Again just looking at the second chart, I think 90+% of men would find women in the 15-30% groups attractive enough. I’m fairly confident that fewer than 1 in 5 men would find the 10% BF woman attractive for an LTR, and it be less than 1 in 10. Generally, men don’t like women who look like men.

Its really sad that neither the average man at 28% (quite sloppy) nor the average woman at 40% (gross) can this relatively easy A.

(I do not vouch for the complete accuracy of either of these charts. I’m just using them as a good visual reference.)

This means one group spent about 10 total minutes on each workout, while the other spent 50 minutes. The SIT group got the same benefits in a fifth of the time.

I’m really excited about as I’m trying to keep cardio going while minimizing its impact of my strength training, but we’ll see how actually works (or doesn’t) over the next couple of months.

I’ve really enjoyed both of them so far.

I haven’t watched Dr. Who since the first couple episodes of the reboot that had Billie Piper as the companion, and had never watched it before then so I don’t really care about the show,  but this is just another example anti-white guy bias..

And the case just really can’t be logically made that this is anything else. Not a single reason to do this other than removing a white male as the lead.

Same thing goes for the idiots wanting the next Bond to be a woman. Sheer insanity. Now if you want to make the next 007 a woman after Bond retires or is killed in the line of duty, that’s fine, though I would think retiring his number would be the least a grateful nation could do to honor him. Elizabeth Hurly, in her Austin Power days, would have been a great 00, but none of that pixie-ninja bullshit please.

Nor do I have a problem with Idris Elba being a 00 operative, but not Bond. I don’t even know if he’s a citizen of the UK, which should be a requirement for a 00.

3. Thou shalt not CURL IN THE SQUAT RACK, for the Lord of Iron shall not hold him guiltless who CURLETH in the SQUAT RACK.

Happened again today at the gym. O, Lord of Iron why do you not smite them for all to see, and let their smoking carcass be thrown into the abyss of the cardio area!?!?