The SJWs are freaking out again and the Reeeees are deafening.Guerrilla activity has been detected in a zone that was thought to be both secure and completely pacified. That of the dime store comic book. All of the producers are either SJW Converged or SJW Friendly. Yet somehow, out of the blue an intifada is…

via #Comicsgate — The Dark Herald

The greatest missile in the world is useless … unless it’s targeted. A torpedo is adrift unless it has someplace to go. An arrow is pointless unless it hits something. So it’s important for kids–for everyone, even if you fail at first–to target something and head in that direction. With all your might.

TIM ALLEN, Don’t Stand Too Close to a Naked Man

Men aren’t allowed to have self-esteem, because we’re already supposed to have all the power…. But most men earn less than they want, barely the minimum wage. They’re drones. They do stuff they don’t want to do to support their families, and they’re not sure why they do it. They don’t know what they’re doing half the time, and any time we stick up for ourselves, we’re pigs because we don’t know how to articulate our frustrations and joys.

“Looking back, we had, in the person of Teddy Roosevelt, the finest President in the history of this country. He had the spirit and determination that matched the times and the land. Then the women got the vote, and everything went to hell. While our boys was overseas fighting the Kaiser, the women got Prohibition put in. Drinking and gambling and whoring were declared unlawful. All those things which come natural to men became crimes.”

Found at the Z blog

Jenny Agutter may have been my first real movie star crush, and I think its pretty obvious how that could happen. Even with shorter hair, she’s a true beauty. 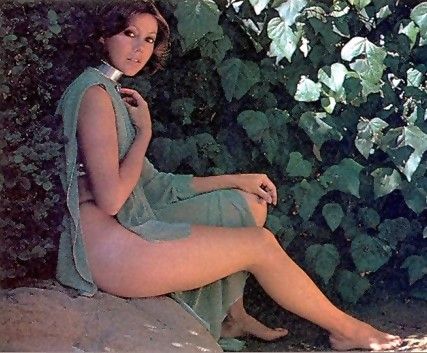 Here’s a modern Jenny, who happens to be a much, much bigger “star” than my crush ever was.

Ugh, she looks like a mannequin that’s been re-painted too many times. But, dang if she doesn’t actually look much better dipped in blue paint.

Dakota Johnson is complete blank spot when she’s in a movie. She’s the daughter of two mid-list stars of 30 years ago, but has no discernible talents of her own. She’s a total 5. Not ugly, but not cute either.

Here she looks “sensational” according to the Daily Mail:

Why are these bland, nothings “stars” in modern Hollywood? Their acting stinks and their looks are mediocre at best.

I’ll leave you to ponder that question while gazing on two more of my favorites from the golden days of tinseltown, Jean Simmons and Gene Tierney:

(Robert E.) Lee replied: “I yet believe that the maintenance of the rights and authority reserved to the states and to the people, not only essential to the adjustment and balance of the general system, but the safeguard to the continuance of a free government. I consider it as the chief source of stability to our political system, whereas the consolidation of the states into one vast republic, sure to be aggressive abroad and despotic at home, will be the certain precursor of that ruin which has overwhelmed all those that have preceded it.”

Mr. Liberty posted this in a comment at the OP site.

Now you could try to argue against either, but you’d be giving yourself away as an enemy.

BTW, I’m against slavery for any idiots who might be reading this. Why am I against it? Simple, if slavery exists then there is a chance, no matter how small, that me or mine could be made slaves (outright, and not just the taxable cattle kind).

Here’s Errol Flynn in my favorite movie of his, Captain Blood:

America has a race problem. For as long as anyone reading this has been alive, this is something that our betters have preached from their various pulpits. By race problem, they have always meant that the bad whites keep finding ways to keep the blacks down and that it is the holy mission of good…

via The Racial Cliff — The Z Blog

This the force behind the frenzy of statue toppling. It has nothing to do with the Civil War or symbols of past racism. It is an attempt to immanentize the eschaton.

From Infogalactic: the planetary knowledge core

In political theory and theology, to immanentize the eschaton means trying to bring about the eschaton (the final, heaven-like stage of history) in the immanent world. It has been used by conservative critics as a pejorative reference to certain projects such as Nazism, socialism, communism, and transhumanism.[1] In all these contexts it means “trying to make that which belongs to the afterlife happen here and now (on Earth)”. Theologically the belief is akin to Postmillennialism as reflected in the Social Gospel of the 1880-1930 era,[2] as well as Protestant reform movements during the Second Great Awakening in the 1830s and 1840s such as abolitionism.[3]

This article starts off:

That’s the message from the Census Bureau’s latest report on “Income and Poverty in the United States.” The news is mostly good. The income of the median household (the one exactly in the middle) rose to a record $59,039; the two-year increase was a strong 8.5 percent. Meanwhile, 2.5 million fewer Americans were living beneath the government’s poverty line ($24,563 for a family of four). The poverty rate fell from 13.5 percent of the population in 2015 to 12.7 percent in 2016.

As astounding as it seems, men’s median earnings haven’t really increased since the mid-1970s. Here are the figures. In 2016, the median was $51,640 for year-round, full-time workers. In 1975, the comparable figure was $51,766. (Note: All dollar amounts are adjusted for inflation and expressed in 2016 money. Again, the median wage is the one exactly in the middle of the distribution — half are above, half below.)

I am trying to teach my boys about what’s real (that’s a pine tree, the wood is fairly soft, but can still be turned into decent lumber) and what is fake (90% of news has an agenda behind it which is not about keeping you informed on what’s really going on), without getting them depressed about the world in general.

Our Brown-eyed Girl Can Sing