Linked by BV over at Spawny’s:

With “Bloom’s Taxonomy of Educational Objectives,” (1949-1953) school is “a tool to classify the ways individuals are to act, think, or feel as the result of some unit of instruction.” Using methods of behavioral psychology, children would learn proper thoughts, feelings, and actions, and have their improper attitudes brought from home “remediated.” Today, such a utopian agenda goes by the name “Social and Emotional Learning,” and it is being pushed hard into all of the schools under the banner of Common Core.

“in our dreams people yield themselves with perfect docility to our molding hands…The task we set before ourselves is very simple…we will organize children…and teach them to do in a perfect way the things their fathers and mothers are doing in an imperfect way.”

“Plans are underway to replace community, family and church with propaganda, education and mass media…the State shakes loose from Church, reaches out to School…People are only little plastic lumps of human dough.”’

Gatto attests that when people are interested in learning, they can learn all of the basics of reading, math, and writing in about 100 hours of attentive study. The mind simply fires away at the connections, when allowed and encouraged to do so. Given that fact, why would public mass schooling demand approximately 25,000 hours of a person’s life?

The obvious answer is so that person’s life can be socially engineered, and children’s independent maturity can be retarded, or even stopped. Gatto doesn’t shrink from calling this psychic violence in the name of social efficiency, and humiliation is the tool it uses: “Something in the structure of schooling calls for violence…[schools] are state-of-the-art laboratories in humiliation.”

What, if anything, good can you say about public education in this country? Here’s the PISA ranking for the U.S.:

The U.S. in 39th in Math and 25th in Science. That sucks and yet we spend more on education than any other country in the world:

The United States spends more money educating its young people than any other nation, according to Education at a Glance 2017, the most recent study from the Organization for Economic Cooperation and Development (OECD), which compiles educational data from nations across the globe each year. In 2014, the U.S. spent an average of $12,157 per student on elementary and secondary education, over 30% more than the OECD average of $9,419.

I put a lot on the blame on teacher’s unions, which make protecting crappy teachers a priority while placing actually educating kids at the bottom of their list.

Of course, Education majors being some of the least talented students entering colleges doesn’t help: 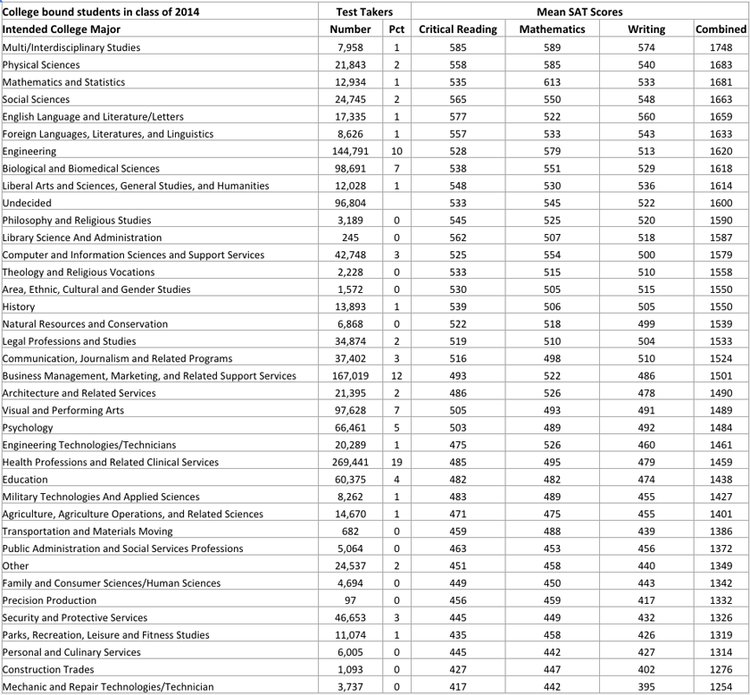 I think people really need to consider home schooling if they can’t afford to pay for good private schools.

7 thoughts on “Reclaiming The Freedom To Think”