…is a wonderful low carbon bike that immigrants can use to get to the border wall, you might just be a Warmist.

Update with more goodness from the Pirate’s Cove.

Now, I really enjoy Steve Sailer’s work. I think his writing is inarguably some of the best stuff on the Internet, but today I found a post that makes me think he’s developing early onset senility.

I’ve come around to the belief that it’s not unreasonable for society to especially try to deter crimes motivated primarily not by basic sins such as rage, greed, or lust but by animus against a demographic category.

Why is that so important that it’s needs special emphasis from society? And here society means the government with its legal monopoly on violence and imprisonment.

Similarly we tend to distinguish between crimes of passion and crimes of calculation—e.g., a man who kills his wife’s boyfriend upon discovering them in flagrante delicto will generally be treated by the law somewhat less harshly than a hired hit man who cold-bloodedly kills the lover for money.

That doesn’t have anything to do with supposed “hate crimes”, so it’s completely irrelevant.

Likewise, it’s not particularly controversial that certain categories of victims, such as children, police officers, and political candidates, are protected by stiffer sentences.

I don’t think those “protections” are worth more than the magic beans I have in my pocket. People who are specifically out to harm children, cops, or politicians aren’t thinking straight in the first place.

The state of Louisiana treats policemen as a group protected by hate crime laws, which in the wake of the Black Lives Matter assassinations of recent years seems rational.

That just makes me think that Louisiana values policemen’s lives more than taxpayer’s.

Similarly, it’s not unreasonable that crimes unmotivated by any personal beef, but simply by animosity toward an entire demographic group, are particularly obnoxious and threatening to the public peace and thus should be deterred by higher penalties.

Hate crimes exist only to punish people from adhering to the narrative that the powers that be want you to follow. Hate crimes are nothing more than Orwell’s thought crimes made manifest in order to crush dissent. They rely on the perpetrators “intent” to establish criminality. The Justice Department says Hillary didn’t intend to break all those laws, which she did indeed break, regarding that private email server, so sh’e not a criminal. But if you mistakenly call a person him instead of their preferred her, your going to jail because you are obviously a “hater”. Fuck that, Steve.

“Many schools would welcome the opportunity to more directly intervene and require counseling when students borrow irresponsibly,” Draeger said.

“Yes, yes, please give us the tools to stop getting kids and their parents to basically sign themselves into debt-slavery for the rest of their lives. Somehow we just can’t figure out how to do that on own own.”, said the College Finance Mafia.

Susan Ortega, president of the Council of Graduate Schools, argued that capping graduate lending would disenfranchise low-income and minority students who need loans to pursue further postsecondary education beyond a bachelor’s degree.

“The demand for professionals who have at least a master’s degree at entry level continues to grow, and we need to ensure students today can pursue degrees that support the U.S. work force of tomorrow,” she said in a statement.

Oh, what the hell…

What Is the Actual Value of a Master’s Degree?

Graduates with their master’s, for instance, are less than half a percent more likely to be employed than those with only undergraduate educations, according to the Bureau of Labor Statistics. And, although master’s degrees are associated with an average salary increase of nearly $12,000, earnings benefits vary greatly by discipline. Data from Payscale.com suggest that master’s graduates in some fields (such as literature and history) do not increase their earnings at all. For students in those fields, earning a master’s degree may most notably lead to a large amount of debt. The biggest boost from a master’s degree accrues for students in science and engineering fields.

So you’re telling me that Susan Ortega, shill for the grad school lobby, may not have been being completely truthful about the benefits of a grad school education? I am shocked! Shocked, I tell you!

Since when did old-fashioned bro humor change the course of a country?
Oh yeah.
Since the country became full of hysterical cunts.

Voting is pointless, but I get where CH is coming from. Tucker says a lot of good stuff and makes us feel a little better, but it’s not going to change anything. He’s hated because he’s a white guy who would bow and scrape (so far). Good for him.

Oh, the horror! The Imperial Department of Education faces a 10% funding cut in President Trump’s proposed 2020 budget! Excerpt: The plan, titled “A Budget for a Better America, ” requests $62 billion for the Department of Education, or $7.1 billion less than the agency’s allowance in 2019. The budget eliminates subsidized student debt, in […]

Dammit, Animal! I’m trying to get some work done today!

Update 3/12/2019 2:54PM EST: It was also disclosed that Willkie Farr & Gallagher Co-Chairman Gordon R. Caplan has been charged. Caplan, described in the complaint as “an attorney and the co-chairman of an international law firm based in New York”, is reportedly said to have donated $75,000 to the brokering entity in question in order to have SAT test administrators correct his daughter’s answers after she finished it.

Update 3/12/2019 1:46PM EST: The complaint alleges that Ex-Pimco CEO Hodge “agreed to use bribery to facilitate the admission of two of his children to USC as purported athletic recruits” and, according to Bloomberg, he “sought to enlist the support of a cooperating witness to help a third child gain college admission”. Hodge declined to comment to Bloomberg when reached on his mobile phone, reportedly only saying, “I can’t talk right now.”

Update 3/12/2019 1:14PM EST: Ex-Pimco CEO Douglas Hodge was also named among those charged in the scheme. Hercules Capital also fell in intraday trading when it was revealed that its CEO and largest holder Manuel Henriquez was named in the DOJ affidavit.

Federal prosecutors announced that they were charging dozens of people, including famous actresses Felicity Huffman and Lori Loughlin, in an alleged scheme to help students get admitted to colleges under false pretenses on Tuesday. They are being charged with conspiracy to commit mail fraud. 38 people have reportedly been arrested thus far.

Prosecutors are alleging that the individuals charged tried to bribe college entrance exam officials in order to cheat on admissions tests and that some conspired to bribe coaches and administrators to label their children as “recruited athletes”. Athletes can sometimes get preferential treatment.

I am completely confused by this. Why is this kind of bullshit even necessary? Hasn’t it always been a time-honored tradition that rich people wrote fat checks to schools to admit their other-wise unworthy kids? That famous young people got into Ivy schools because they were famous? Does anyone really care? I mean, really? WTF?

Lori and her husband broke laws to get their girls into USC? Does anyone think USC is a great school? Again, WTF?

P.S. Damn, I really wanted to bang Lori Loughlin back in her prime days. What a cutie she was, and she’s held up real well from what it looks like. She got some hot daughters too. 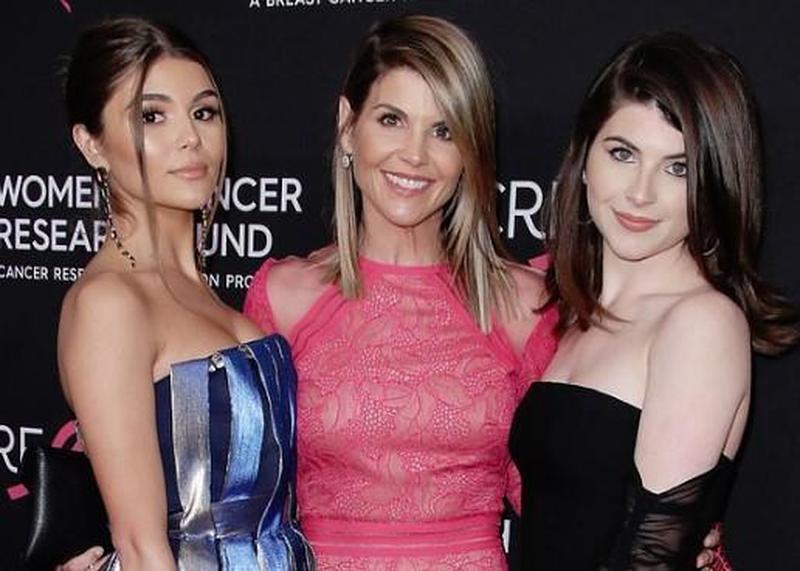 Lefty looks like a real bitch, but I’d still do her. Righty is pretty, but doesn’t have her mother’s charms from when she was young.

Steve Sailer is also puzzled by this nonsemse:

It is bizarre that parents are paying hundreds of thousands of dollars to get their kids admitted at mid-range colleges as athletes in sports they don’t play. I mean, I could imagine some super competitive sideline dad whose kid is pretty good at a sport bribing a coach to admit his kid so he can brag to his brother-in-law that you didn’t think it would pay off, but now my boy is USC’s pole vaulter.

That could be a pretty funny 1970s-1980s sports movie: a grizzled old college coach decides he needs a nest egg to retire, so for his last season he recruits the worst rich kids whose sidelines dads will pay him huge amounts of money to get their sons on the field. In fact, I’m surprised that movie wasn’t made a generation ago.

But, back to the subject at hand, I haven’t seen anything else about affirmative action fraud, which is an awfully interesting subject, going back to Soul Man a third a century ago. I imagine you could make a lot of money off parents just by acting like you know what you are talking about, since nobody else seems to have any credible information on the subject (I’ve looked).

I think he meant “triple-bankshotty”.

The government of Finland collapsed Friday due to the rising cost of universal health care and the prime minister’s failure to enact reforms to the system.

Prime Minister Juha Sipila and the rest of the cabinet resigned after the governing coalition failed to pass reforms in parliament to the country’s regional government and health services, the Wall Street Journal reports. Finland faces an aging population, with around 26 percent of its citizens expected to be over 65 by the year 2030, an increase of 5 percent from today.

It’s not just Finland experiencing such problems with its socialist policies.  Other Nordic countries, also touted by American socialists and communists as the model America should follow, are suffering similar economic burdens directly related to their socialist policies.

“Nordic countries, where comprehensive welfare is the cornerstone of the social model, have been among the most affected,” according to Reuters. “But reform has been controversial and, in Finland, plans to cut costs and boost efficiency have stalled for years.”

Similar problems are bedeviling Sweden and Denmark, two other countries frequently held up as models to follow on health care. Finland’s crisis in particular comes as calls for universal health care have grown louder among Democrats in the United States.

Only idiots (and liars) believe that Socialism is workable. It always fails because it depends on a complete denial of reality. And, as we all  know, just because you ignore reality doesn’t mean that reality will ignore you.

Goodbye, Blue Monday!Thanks as always to Pirate’s Cove for the Rule Five links! So, yesterday morning we observed the first half of our annual Daylight Savings Time stupidity, wherein we pushed our clocks an hour ahead because… reasons, including some hand-waving about extra daylight in the evenings reducing energy expenditures. Later on this year we’ll…

One kind of “medical error” we did see on occasion was when the patient’s doctors are dutifully doing the treatment that’s “standard-of-care”, but the medical literature actually shows that the standard-of-care is wrong.

There are cases where large, well-conducted studies clearly show that treatment A and treatment B have the same efficacy but B has worse side effects, and yet, “first-line treatment” is B for some reason.

Interesting post and unfortunately all too common and too true.