…is a world flooded by carbon pollution from America*, you might just be a Warmist The blog of the day is Weasel Zippers, with a… 39 more words

Happy Sunday! It’s a gorgeous day in America, and a great day to take a drive somewhere, right! This pinup is by Gil Elvgren, with a wee bit of help. What is happening in Ye Olde Blogosphere? The Fine 15 Climate Change Dispatch notes Chicago will break snow records with weekend storm Jo Nova covers…

…is a horrible, evil, no good golf course sucking down water and causing temperatures to skyrocket, you might just be a Warmist The blog of the day is The Other McCain, with a post on three scary words.

Oh, I see, your gripping the club wrong. Here let ME show you how to grip a club… 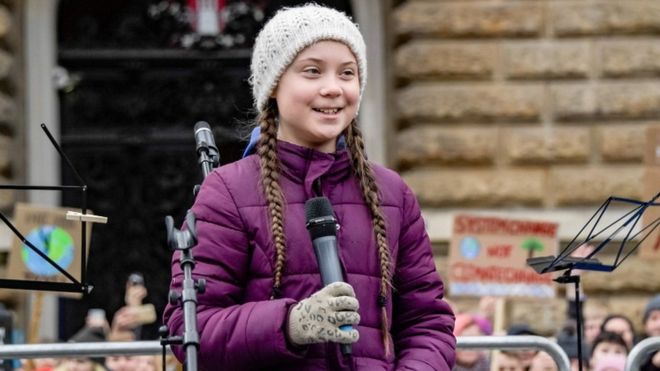 “Is that an Elkhound puppy over there? Nummy!”

Greta Thunberg, the Swedish schoolgirl who has inspired an international movement to fight climate change, has been nominated as a candidate to receive this year’s Nobel Peace Prize.

The 16-year-old was nominated by three Norwegian MPs.

If she were to win, she would be the youngest recipient since Pakistan’s Malala Yousafzai, who was 17 when she received the prize.

“We have proposed Greta Thunberg because if we do nothing to halt climate change, it will be the cause of wars, conflict and refugees,” Norwegian Socialist MP Freddy Andre Ovstegard told AFP news agency.

“Greta Thunberg has launched a mass movement which I see as a major contribution to peace,” he added.

I received a rather frantic email from a friend when school started last fall. Panicking over the number of parents posting first day of preschool pictures, my friend wondered if she had made a mistake by not sending her four-year-old to school. “When did preschool become so popular?” she asked in dismay.

She wasn’t imagining things. Preschool is very popular. Education is important, argues society, so the sooner a child starts school, the better off he will be. As a result, many little kids are almost expected to read and do simple algebraic equations before starting kindergarten. (I’m kidding on that last one. But, you never know…)

It hasn’t always been like this. Once upon a time kids didn’t go to preschool. Or kindergarten. And when they did go to the latter, the expectations were much more kid-friendly and age appropriate.

I realized this when I ran across the following image shared by Sarah Mackenzie, author of The Read-Aloud Family. Strikingly absent from the list, Mackenzie notes, is any mention of knowing letters or being able to read.

Kids go to school earlier because its free daycare for (often single) mothers who now work outside the home. Instead of learning how to learn, they are now rushed into reading and math because that”s how a factory works. Set production methods with set production goals, and zero tolerance for non-conforming pieces.

Happy Hump Day!Heading out to catch a plane here in a bit, so here are some tidbits from the news, along with a few pithy comments. Her Imperial Majesty, Dowager Empress of Chappaqua Hillary I, has some opinions on the Mueller report. She does now? What might they be, do you suppose? Just kidding, I…

Animal is bringing the Hump Day Heat for youse guys.

Pic needed embiggening, but dat ass is perfect the way it is.  Also, for the record, I do NOT like big butts.

Elizabeth Warren’s weak showing in the polls, lackluster fundraising, and late resignation of her campaign finance director make it obvious she’s got questionable staying power in the 2020 field. So, in an effort to remain relevant, she’s pitching mass student loan forgiveness. This is an appallingly dumb idea, mainly due to moral hazard:What’s to prevent someone from borrowing…

If All You See…

That caboose needs a bigger cow catcher from this angle.

…are white rabbits which will totally be affected by you eating burgers, you might just be a Warmist The blog of the day is Victory Girls Blog, with a post saying that the Dems should really try and impeach Trump. Please, please, please.

I can’t remember what rabbits have to do with it, but I hope you had a Happy Easter.

…is horrible carbon pollution in the sky, you might just be a Warmist The blog of the day is Moonbattery, with a post on anthropogenic climate change as a cult.

This is one seriously cute girl. Great smile, too.