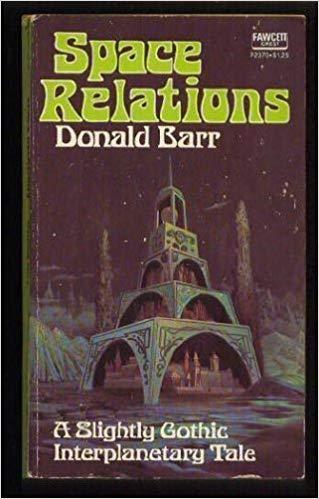 For obvious reasons, I don’t talk a lot about current events on a blog called “Vintage Geek Culture.” But there is a truly bizarre connection in this 60s scifi novel to the current case of Jeffrey Epstein, a man who ran a hedge fund surrounded by intelligence agents and trafficked in underage girls in a sex ring, one surrounded by key members of finance and politics.

The author of this novel is former wartime intelligence agent Donald Barr, the father of the current Attorney General, William Barr. As principal of the Hackley Private School in the 1970s, Donald Barr’s day job, Barr was the first to hire Jeffrey Epstein as a math teacher, despite the fact Epstein didn’t have a college degree.

Here is where it gets weirder. The plot of “Space Relations” is that ultra wealthy aliens, debauched and bored and unable to be satisfied by their riches, start to kidnap humans as sex slaves, transporting them into space to be given as illegal playthings of the super rich of the galaxy.

Nothing to see here. Move along, move along.

One thought on “Epstein Didn’t Kill Himself Or Die From The Chinese Virus From Wuhan, China Either”