Gosh, it seems like the American media have some other goal than just reporting the news. 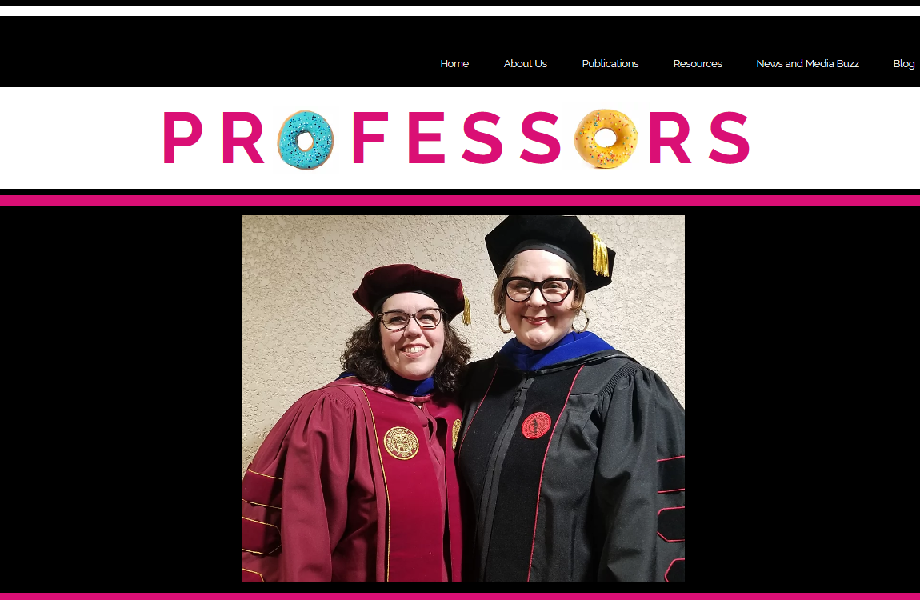 Thoune’s colleague Laurie Stoll who earned her doctorate in sociology with a concentration in women’s and gender studies, is the second one of the “Two Fat Professors.” She published the most viewed blog post on the site which is titled, “I See You, Fat Grrl: Fat Pride and Fat Visibility.”

Thoune wrote her piece, “Diet Culture at the End of the World,” in response to the many “number of posts that have popped up on [her] social media sites addressing fears about weight gain.” According to the professor, these posts “shame viewers for: not going to the gym, eating ‘too much,’ for getting fat, and for not starving ourselves at the end of the world” and are representative of a problematic “diet culture.”

The blog post repeatedly refers to those who are cognizant of their weight, as part of “diet culture.” Thoune criticizes those who speak out against weight gain and characterize it as “dangerous,” saying they feed “into a system of fatphobia that oppresses and abuses so many.”  …

“who earned her doctorate in sociology with a concentration in women’s and gender studies,”

Because of course she did. Will the wonders of college education ever cease?

Thoune’s post cites a 2008 study conducted by the University of North Carolina and SELF Magazine which found that about three in four middle-aged women have an eating disorder.

You wanted some Defcon 1 Trump Derangement Syndrome? Here you go This is an actual tweet from an actual state rep. https://t.co/E32irnKBHF — Sister Toldjah (@sistertoldjah) April 6, 2020 This was in reply to Go Blue 44 And an invitation to The Hague for crimes against humanity for pushing a drug that hasn’t been tested…

Look, all women are crazy (AWAC). Some may not be as crazy as others, but they are more than made for at the other end of the curve. I would love to throw in some “fat tail” analysis here, but we all know the female fat tail problem exists in multiple areas of modern society.

Fuck that “headquartered in San Francisco” bullshit. Its a Chinese company.

This is the app that everybody in the U.S. business and educational sectors is putting ALL their data on.

Unlike most tech companies preparing to go public, video-conferencing startupZoom is profitable. One key driver of Zoom’s profitability: a large engineering team in China, where average tech salary is relatively lower than in the U.S.

Zoom’s large R&D presence in China, which is likely made easier by CEO Eric Yuan’s Chinese background, is turning out to be a major cost saver for the video-conference software maker — and reflects an increasingly popular strategy among fast-growth tech companies.

Zoom disclosed in its IPO prospectus last week that most of its product development personnel are based in China. Zoom employs over 500 people across multiple R&D centers in China, which accounts for roughly 30 percent of its total workforce and 70 percent of its non-US-based employees, according to the prospectus.

“Our product development team is largely based in China, where personnel costs are less expensive than in many other jurisdictions,” Zoom wrote in its filing. “If we had to relocate our product development team from China to another jurisdiction, we could experience, among other things, higher operating expenses, which would adversely impact our operating margins and harm our business.”

In Zoom’s case, having a CEO of Chinese descent seems to help recruiting in the country. Zoom wrote in its prospectus that Yuan’s role is “critical” to the management of its engineering and general operations in China, as he spent most of his early life in China, and earned his bachelor’s and master’s degrees there.

I already contacted our VP about some security concerns with Zoom last week and got the brush-off. Oh, well.

Holy Fucking FUCK. I hadn’t seen this at time of original posting:

Popular video-conferencing company Zoom Video Communications (ZM) admitted that it had “mistakenly” allowed calls to flow through China, adding to a number of mis-steps raising doubt on the security of the platform.

Zoom said in a statement on Friday that certain meetings held by its non-Chinese users may have been “allowed to connect to systems in China, where they should not have been able to connect”.

“In February, Zoom rapidly added capacity to our Chinese region to handle a massive increase in demand,” said Zoom CEO Eric S. Yuan. “In our haste, we mistakenly added our two Chinese datacenters to a lengthy whitelist of backup bridges, potentially enabling non-Chinese clients to connect to them.”

The Silicon Valley-based company said it had since fixed the issue, explaining that the mistake occurred only “under extremely limited circumstances” and that government users were not affected.

Our friend and fellow deplorable left this in a comment, but it’s front page news ’round these parts.

Nearly all “non-essential” businesses are suspended in nearly every county of the country. Yet now, because immigration policy has been outsourced to former visa lobbyists like Acting DHS Secretary Chad Wolf, one thing will not be shut down during this man-made economic Hiroshima: foreign workers, including those from … China!

When I warned last week about the H-1B lottery and the need to cancel it on April 1, I didn’t really think my notice was necessary. After all, how could an “America first” administration conduct such a foreign worker lottery while shutting down the entire economy for Americans? Nonetheless, I published the article for good measure. Well, it’s a shame 1,000 other conservatives didn’t post similar warnings, because “America first” has now become “India and China first.”

On April 1, USCIS considered bringing in more Chinese workers an “essential” function and opened registration for the first day of the visa lottery. Every year, 85,000 H-1B visas are awarded via this lottery, and on the first day it was already saturated with 275,000 applications from corporations, a 37 percent increase over last year. Those chosen will be eligible to come here in fiscal year 2021 beginning this October.  Of course, 67 percent was monopolized by Indian nationals, which is why we have lost our tech industry to foreign powers. Roughly 36,300 applications, though, were from, you guessed it, Chinese nationals!

Obviously, this doesn’t mean Chinese nationals will necessarily be chosen, but they have typically composed roughly 13 percent of the annual lottery. And it’s not like this administration is placing a moratorium on Chinese visas until the Chinese government comes clean on the cover-up of the China virus.

Bringing in any foreign workers, much less Chinese ones, at a time like this is akin to doubling our immigration from Saudi Arabia after 9/11. Ooops … we actually did that, but I digress.

This is not to cast aspersions on the Chinese people as a whole. But as long as the evil communist government is ruling that country, our current policies put us at their mercy in times like this in three ways.

We now know that China destroyed evidence and covered up critical information that could have given the world weeks of head start in blocking travel and bending the curve. How in the world can we allow China to own our universities, our immigration system, and our supply chains, knowing the Chinese government’s intentions and knowing how it has unleashed an economic and health care version of 9/11 on us?

Finally, putting China aside, we had 10 million unemployment claims filed just in two weeks. If you account for those who have had wages or hours cut, that includes 39 percent of all adults in the country! And we are just three weeks into this. The bipartisan political elites, sadly, including this administration, want this to go on for much longer. Under what sort of morality or model can this action be justified? Don’t tell me Fauci’s models show that bringing in more foreign workers will also save more lives too!

Further appalling is that, thanks to the misguided strategy of this universal shutdown, many nurses are being furloughed across the country. Among the other sacred foreign work permit programs promoted by some of these same administration officials is Optional Practical Training (OPT), which brings in numerous foreign nurses here as students. Employers facing a massive pool of unemployed Americans will be incentivized to hire them because, under the lawless, unauthorized OPT program, they don’t have to pay payroll taxes. Why wouldn’t Trump immediately suspend the OPT program?

If we don’t hanging some of our “leaders” real soon…

Well, I’ll just leave it at that.

To lead off Pirates Cove has posted his 800th Sorta Blogless Sunday Pinup Post! He is like the Babe Ruth of Blogging!!

Whores and Ale leads off with WINGS

Knuckledraggin has the story of a man named Browning

The Lid has more on Senile Joe’s descent into,well…………

The Other McCain looks at 3M vs Trump

The Last Tradition covers MSNBS so you don’t have to

Sonoran Conservative notes that AOC is still a moron

Red Pill Jew has some FIRE!

Moonbattery notes that yes, it CAN happen here

Diogenes has the Blues

90 Miles has some ironic irony

Zendo Deb notes that yes, self-defense IS a right

Many thanks to The Daley Gator for the linkage!

“Thus earning him a slim chance to perform the reproductive act.”

“But in a world where teens can date robots, why should he bother? Why should anyone bother?”

It makes you think, don’t it.

Happy Sunday! It’s still better to be in America than anywhere else. The sun is shining, the birds are singing, and things will turn around. This pinup is by Gil Elvgren, with a wee bit of help. BTW, this is the 800th edition, and I started doing this on 4/3/2005. It evolved from just photos…

Despite being an American Icon the Boy Scouts of America (BSA) has been on death row for a long time now. Fifty years of unrelenting attack and subversion by the Usual Suspects has culminated in the organisation recently filling for bankruptcy. Yes, the BSA is bankrupt. The straw that broke the camel’s back was a…

via And another one bites the dust — The Irish Savant